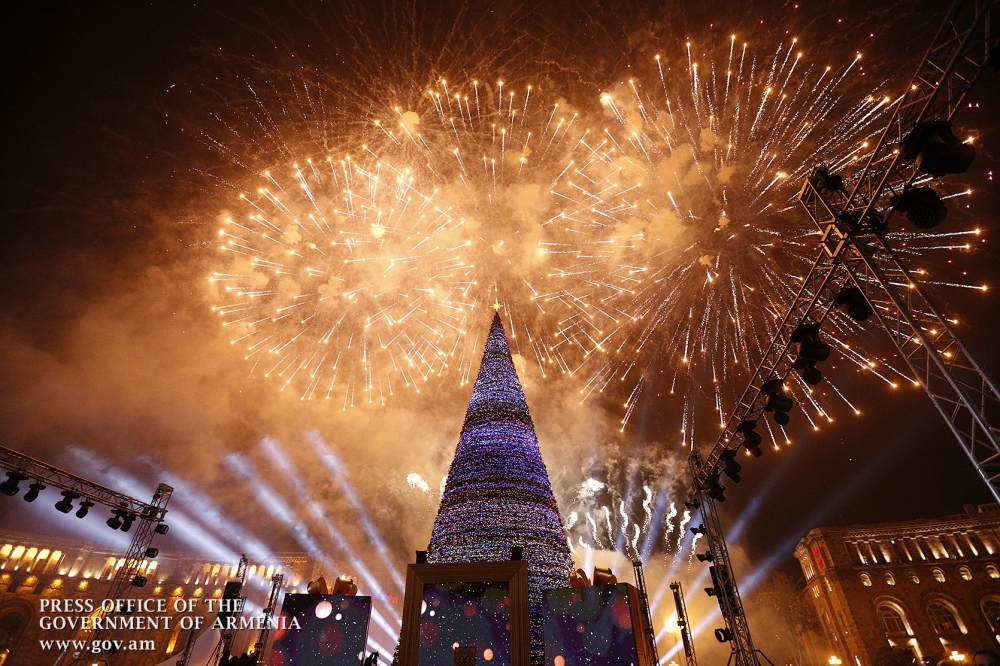 Holidays help a traveler to learn more about the country and its culture. Armenia is a country of contrasts and rich culture. There are different holidays here and visiting Armenia you definitely need to know about some of them. Let’s get acquainted with the most popular holidays in Armenia.

Every year begins with the New Year as in a lot of countries on December 31st. Armenian celebrate it from 20th century especially when Armenia joined USSR.

Armenians start New Year preparation almost a month before the holiday because it is one of the most favorite holidays of Armenian people and they pay attention to each detail. Before and after 31st of December in the frames of New Year celebrations you will be able to enjoy amazing events, performances, festivals in the streets. There is a Christmas market in the center of the city in the Northern Avenue with unique handmade gifts, souvenirs, Christmas tree decorations etc.

In the middle of December the main Christmas tree is decorated in the Republic Square in Yerevan. There is certain day (usually on December 20-25th ) when all the lights of Yerevan and Christmas tree lights are switched on by the head of the city and great concert show is held for the children and adults as well.

This holiday lasts about a week during which Armenians both host a lot of guests and visit their friends and relatives. It is widely known that Armenian people are very hospitable that is why especially during this holiday people can visit each other without warning. The tables on these days are always rich in different dishes, snacks, fruits and sweets as Armenian people believe “the way you celebrate New Year will set the course of the next 12 months”. New Year is very exciting holiday during which Armenian people congratulate each other saying “Shnorhavor Nor Tari/Amanor” and give gifts to each other as well.

Before Soviet rule, there were more religious families and they had to fast for a week before Christmas (January 6). Thus, before Soviet times one could see only vegetarian dishes on the holiday table. One of the most popular dish was pasuts tolma with groats and dried fruits in a cabbage leaf which excludes meat unlike common tolma made of grinned meat in a grape leaf. On New Year’s Armenians used to cook gata. There is a tradition of putting a coin inside gata and it was believed that the person who got the coin from his piece of cake would be successful in the upcoming year. Some families still keep this tradition. Next dish is ghapama– a pumpkin stuffed with rice, nuts and dried fruits.

Nowdays those disher are not any more popular to cook in Armenia. Armenians now lay the tables with roasted pork leg , tolma, pancakes with meat inside, different kinds of salads with poultry, ishly kyufta, homemade pastries, different dried fruits, candies and different nuts. And, of course, it is impossible to imagine any Armenian table without alcoholic beverages especcially Armenian cognac and wine. 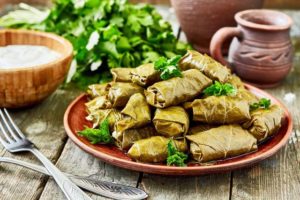 Armenian Apostolic church celebrates Christmas on 6th of January. You may ask why Armenians celebrate Christmas in January if most Christian churches do it on 25th of December. In fact, All Christian churches celebrated Christ’s birth on January 6th until the 4th century. It was shifted from January 6th to December 25th to make the folks forget a pagan feast which was celebrated on December 25th.

On Christmas Eve Armenians take lit candles from the churches and bring them to their homes. Christmas Day is also known to Armenians as Water Blessing Day. This day after the liturgy in the morning the priest of the church blesses the water and people take some holy water to their homes. People believe that water blessed in the church is useful for health and they drink it or wash their face with it.

Regarding the menu of Armenian Christmas table, the main dishes which are served in all families are rice with dried fruits and raisins, dishes from different greens and fish. Red wine is also must on the Christmas table. The above-mentioned dishes are not chosen by accident, each detail has its significance. Rice – symbolizes people, dried fruits – apostles and other people selected by God to spread Christianity. Fish is a symbol of Christians, and finally red wine- the blood of Jesus Christ.

Trndez, in church terminology is known as Tyarndaraj (The Candlemas day) which means “come to God”, is celebrated on 13th of February. The name “Trndez” is more popular among Armenian, and it means “God be with you” (Tern ynd dzez). This holiday is especially celebrated by those families where there are newly married couples. On Trndez people make fires in their yards and go round the fire, then they jump over it. Couples usually jump together holding hands. People also dance traditional songs and dances around the fire.

Although nowdays Trndez is celebrated as a Christian feast it has pagan origin. The feast was connected with fire worship. It was celebrated as a feast of spring, awakening nature and symbol of fertility. People believed that after Trndez celebrations the weather was getting a bit warmer.
On Trndez Armenian women cook aghandz. Aghandz is roasted grains of wheat and hemp. They also make gata (traditional sweet cake). Women treat with aghandz, pokhindz, nuts and sweets to everybody. 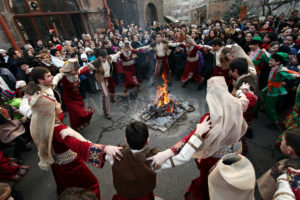 24th April is the day to commemorate the victims of Armenian Genocide in 1915 in Ottoman Empire. In 1988 Armenia formally announced 24 April as a public day of commemoration.
In 1915 Turkish government arrested and murdered hundreds of Armenian intellectuals and leaders of the communities in Constantinople (now Istanbul). The killing was followed by massacres of the male Armenian population across Ottoman Empire and the deportation of Armenian women, children, and the old people into the Syrian Desert. As a result more than one million Armenians were killed.

The day before at night of 23th April traditional torch march is held. Thousands of people (mostly young) walk to Tsitsernakaberd- Genocide Memorial with posters condemning the Armenian Genocide and calling for restoring the historical justice.
This day Armenians from all over the world go to the Genocide Memorial to honor the memory of the victims.
Armenian diasporas in different countries also organize marches in memory of Armenian Genocide victims calling out to recognize it to prevent repetition of such massacres in the world.

Inspite of numerous historical facts that it was a genocide Turkey still denies it. Threats with economic and diplomatic consequences to the countries which recognize it. By 2019 governments and parliaments of 31 countries have recognized those events as a genocide. 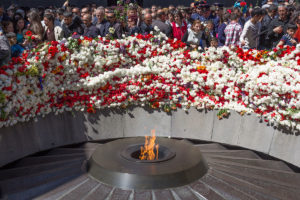 Vardavar is famous Armenian water festival which is called in Armenia also as “jrotsi”. The feast is the most enjoyable one during summertime. Usually, it is celebrated in July. This day all people in Armenia splash water to each other as a symbol of purity.

Nowdays Vardavar is a Christian holiday when Armenian Apostolic Church celebrates the Transfiguration of Jesus Christ. However, the feast comes from pagan period. At that time the festival was connected with the worship of goddes Astghik. There is a legend that Astghik spread love all over Armenia by splashing rosy water, this is where the name Vardavar (vard- rose) comes from.

Vardavar is the day when you can see everybody at any age to drench water to each other in each village, town or city of Armenia. No one is allowed to get offended this day. So, be ready to be drenched with water, keep safe your phones and bags and try to enjoy the fun of the holiday by joining to the celebrations with Armenian people.
One of the best places to spend this day is Garni pagan temple where you can join the people performing Armenian national dances and songs. 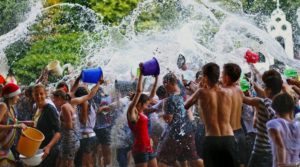 Independence day (“Ankakhutyan or” in Armenian) is one of the most important holidays in every country. Armenia celebrates its independence on 21st September. In 1991 on this day Armenia seceded from the Soviet Union.
Let’s go back to ancient times to understand why independence is very important for Armenians.

Before 14th century Armenia was a powerful country. Armenia has more than 3500 years of recorded history. It starts with a tribal confederation of Hayasa, later Armenia was united under the Kingdom of Ararat/Urartu, then it was under rule of Persia and Macedonia. Then Great Armenia grew rapidly and during the reign of Tigran the Great (95-56 BC) it extended form the Black Sea to the Caspian and the Mediterranian Sea being called “the Kingdom from sea to the sea”.

After that Romans, Parthians, the Byzantine, Arabs ruled Armenia respectively until 13th -14th centuries. After that Turk Seljuks’ invasion put the start to a new period and until 17th century Armenia lost its independence. There is an interesting fact that in this period of time cultural and architectural aspects were growing and developing rapidly. The Armenian nation has never been assimilated with the invaders, furthermore, they kept their mentality, language and culture thanks to conversion to Christianity in 301 (being the first to adopt Christianity as a state religion) and creation of Armenian unique alphabet by Mesrop Mashtots in 405. After rule of ottomans and persians russians came to rule Armenia in 19th century. However, after the collapse of the Russian Empire, Armenia finally became independet in 1918 however in 1922 joined the Soviet Union. 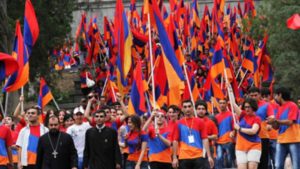 During the year various events are held all over the country in frames of the celebrations of the day. Most of the events take place in Yerevan- the capital of the country.
In the churches a liturgy is served. Besides, the president awards people for their service to the country.

Often in honor of the Independence Day military Parades are held in Republic Square, Yerevan with the presence of the president and other officials. People gather here with their children to watch the military equipment and military performances.
All over the country in the squares concerts shows are held. The day ends with great firework shows.